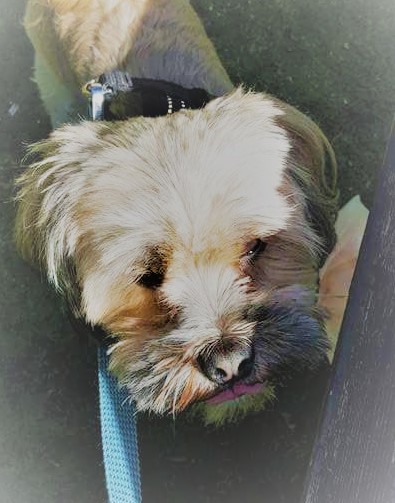 I was contacted by email by Fiona, owner of Molly. Fiona had recently adopted Molly, a 5 year old Lhasa Apso. Molly had been in her new home for around 6 months and was settling in nicely. She was getting on really well with the children in the family and the resident cat!

Unfortunately Fiona was having problems with Molly when she was out walking. On seeing any other dogs Molly would ignore her owners and behave aggressively towards the other dog, barking and growling.

This was very stressful for Fiona and her family (and for Molly!) as they felt that they couldn’t enjoy normal dog walks with her, and couldn’t let her off lead for fear of her attacking another dog.

When I went to meet Molly she was a really sweet little dog with a lovely new family who were all committed to helping Molly with her training.

After going through Molly’s history and lifestyle I suggested that Molly was reacting in the way that she did not because she was aggressive, but because she was scared of the other dogs and wanted to keep them away!

This is often the case when dogs react to other dogs on lead, they feel threatened and become defensive.

Although Molly had never had any training before we were starting with a blank slate and she had a wonderful bond with her new family so was delighted to start training with them!

We started off introducing the clicker to Molly, and the idea that we reward the behaviours that we like and she took to it straight away! Within the first session we had taught her Sit and Lie Down, she really is a clever little girl and Fiona was so proud of her. I loved getting videos of her progress.

We also took her on a short walk so I could assess how she and her owners reacted when she came across other dogs.

During our training it was essential that Molly was given space from other dogs when she needed it so we practised this and taught her owners how to move her away and make space. This would build up Molly’s confidence so that she would relax more on walks.

Firstly we worked on focussing Molly’s attention out on walks, so that she was listening to her owners and able to follow their cues when asked. We taught her to ‘Watch’ and look back at her owners regularly using the clicker and pieces of chicken. We also taught her to move away from potential threats when she wanted to but using a ‘Lets Go’ exercise again with the clicker and chicken.

Molly picked these exercises up very quickly and soon went from being very distracted on walks to regularly checking in with Fiona and responding to being asked to ‘Watch’ and ‘Lets Go’.

This taught her two things – one that when other dogs were around she got to do some training which usually meant chicken, and two, that even if she didn’t bark at the other dogs, they weren’t a threat to her.

Molly continued to progress really well and after our home training sessions she joined our Barky Bunch club and came on some training walks where we were able to practice the exercises she has been working on in calm controlled and supervised set ups with other dogs who were working on similar exercises.

Molly even went one step further than we expected and made friends with one of our other ‘barky’ dogs Toby, and began to learn to play with him!

It has taken hard work and commitment but Fiona and her family are now able to enjoy the walks that they always hoped for!

‘Molly is a 5 year old Lhasa Apso. We took her on as a 3 year old when a family member could not care for her any more. She had not been mis-treated but had had little done with her apart from fed and watered. She did not know how to interact with other dogs or people for that matter.

After a year of trying on our own without success we found Nicola after searching online and have never looked back.

During sessions at home Nicola was able to observe Molly’s behaviour around other dogs. As she didn’t know how to interact she assumed all other dogs were out to get her and so would lunge aggressively and try and attack them. This was very distressing for the other dog, us and her and we could never entertain letting off the lead to run like a ‘normal’ dog.

After working individually and having success with some simple but repetitive techniques we moved onto class work, boy were we scared!!

Nicola had set up a small group of dogs with similar issues which is brilliant. We worked both inside, in the yard and on walks. Again, Molly came on in leaps and bounds.

We now find ourselves in a position we could never envisaged…..a dog who just wants to play!!! It’s funny, we now refer to her as a ‘real dog’!! It’s little things with her, the first time she drank out of a puddle on a walk, I thought there was something wrong with her till we realised that’s what dogs are supposed to do!

So where are we now. A year after our first session we still have work to do. We need to work on socialising with dogs on the lead and her recall. She just wants to play with everyone now, so needs to learn to come back! I think people don’t realise the work involved in owning a dog.

Training is important to build a bond between you and your dog.

Our relationship with Molly has improved no end and will we ever be thankful to Nicola and her team for that.’